I have received more comments about this shirt than any piece of clothing I have ever owned:  my spiffy, turquoise EAT MORE KALE t-shirt.  People stare, laugh, turn their heads to watch me pass on the street, nudge their companions, make grimmacing kale-is-yucky expressions, and–best of all–stop to talk.  I hear that folks love kale, hate kale (a controversial vegetable!), grow kale, have the best kale pesto recipe ever, credit kale with the curing of various ailments.  But the most common comment far and away is this one: “I know kale is good for me, but I’ve just never liked it.”

I have a Kale Calling:  I love kale, and I want everyone to love it as much as I do.  It’s beautiful, easy to grow year round in the Pacific Northwest, is glowing with health benefits, and–when fixed well–is truly delicious.  But let’s be clear.  I’m not talking about that cactus-like winter/Russian kale with the red veins.  If you are growing that, and you think you don’t like kale, and can’t get your kids/sweetie/dog to eat it, then it is time for a kale variety switch.  There are lots of good ones, but my personal favorite is the dark blue/black Tuscan Nero kale, also called “Black Palm.”  It grows into a small palm tree of kale (people sometimes think it’s bolting, but it’s not–it’s flourishing).  The leaves are the prettiest shade of deep blue-green, and it tastes sweet, even when raw, and especially after a frost.

Kale is dripping with radiant health:  vitamin C, vitamin K, iron, beta-carotene, lutein, calcium, indole-3-carbinol (which encourages DNA repair at the cellular level and may block the growth of cancer cells).  Also lots of other things, which I have never heard of and cannot spell, but which are reported to be very good for us, including nutrients that:  improve eyesight, prevent cancer and colds, boost brain function, possess anti-inflammatory qualities, enhance digestion, and, and, and…the list almost literally never ends.  In

World War II, the U.K’s “Dig for Victory” campaign (the English version of the Victory Garden), promoted the planting of easy-to-grow kale to help replace nutrients missing from everyday diets because of food rationing.

Still, you can’t just throw the stuff on someone’s plate, steamed until rubbery, and expect them to love it.  No matter how you fix your kale, first remove the thick stems and central vein.  You can do this by folding the leaf over and cutting the stem out with a chef’s knife or, even easier, with kitchen scissors (or any scissors–I also cut pizza with scissors!). Then try this simple, classic Italian recipe:

Kale with Garlic and Olive Oil

Parboil a big bunch of kale in a large pot of boiling water with a couple teaspoons of kosher salt.  Parboil only for 2-4 mintues, until the kale is tender.  Transfer immediately to a bowl of ice water (pluck out with tongs if you want to save the water), then drain, squeeze out all the water you can, and chop coarsely.

Heat 1-2 tablespoons of good, extra-virgin olive oil in an heavy skillet or wok over medium heat.  Add plenty of minced garlic, a pinch of hot red pepper flakes (to taste), and stir until the garlic is fragrant and just begins to color. Toss in the greens, and stir for a couple of minutes until the kale is nicely coated and seasoned.  Add a sprinkle of finishing salt, and some fresh ground pepper.  If you like, serve with lemon wedges to squeeze over the greens.  SO yummy!  This is really wonderful with farro, toasted hazelnuts, and some crumbled gorgonzola.

Cut stems out of the kale, then chop leaves into two inch pieces.  Toss to coat lightly with a good olive oil, and season as you like–with course salt, fresh ground pepper, a touch of cayenne…

Place the leaves in a single layer on a parchment-coated baking sheet, and pop them in a hot oven, 425 F, for 8-12 minutes.  Keep an eye on the chips!  They should just start drying/curling/coloring, but not become over-brown or brittle.  It’s a fine line.  These are so delicious–just like potato chips, you can’t stop eating them.  Even my non-kale-loving husband munches these till they’re gone.

To successfully freeze kale:  remove stems and lightly blanch as above before freezing.  Remove as much air from the container as possible before putting it into the freezer.  If using freezer bags you can mimic vacuum packing by putting a straw in one side, zipping the bag all the way up to the straw, sucking the air out, then quickly sealing the last corner of the bag as you pull the straw out.  It’s fun.

Try substituting kale for half the basil next time you make pesto.  Try sauteeing the greens in a little butter with some cinnamon, and serve in a roasted half of butternut squash.  Try a lovely harvest season soup of kale, whatever squash you have on hand, tomatoes, and white beans in a nice vegetable stock.  To inspire your kids to eat it, serve with parmesan biscuits (just toss a handful of parmesan into your favorite biscuit recipe).  Try telling us your favorite kale recipe so we can try it!

For your very own hand-screened and dyed “Eat More Kale” shirt, contact Bo, the Eat More Kale guy, at his studio in Vermont. 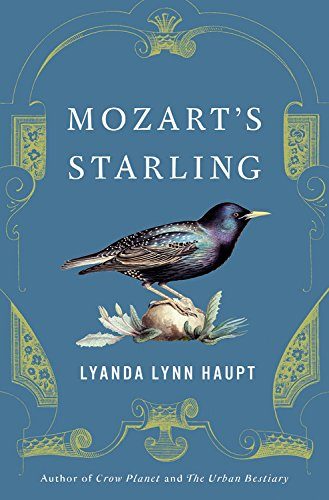 I’m nature writer Lyanda Lynn Haupt, and this is my blog. Here I celebrate our innate, creative connection with the wild, natural world. My new book is Mozart's Starling.

Buy the Book:  Amazon, Barnes and Noble, IndieBound
“Mozart’s Starling is a delightful, enlightening, breathless flight through the worlds of Carmen and Star, two European starlings who join their human counterparts in exploring life and music and nature, helping to shed light on the connection between humans and birds--those of us bound to terra firma, and those of us who are free to soar.”
—Garth Stein, NYT bestselling author of The Art of Racing in the Rain and A Sudden Light